You are here: Home / Blog / Idea Generator for Kids

It was after a long conversation with his Mum, Rachel Conlisk during half term that they then decided to put his thoughts and ideas into action and went home to create this idea generator.

We have had the privilege to speak to Sam and his Mum Rachel all about his idea generator and the MAGIC behind his creation. 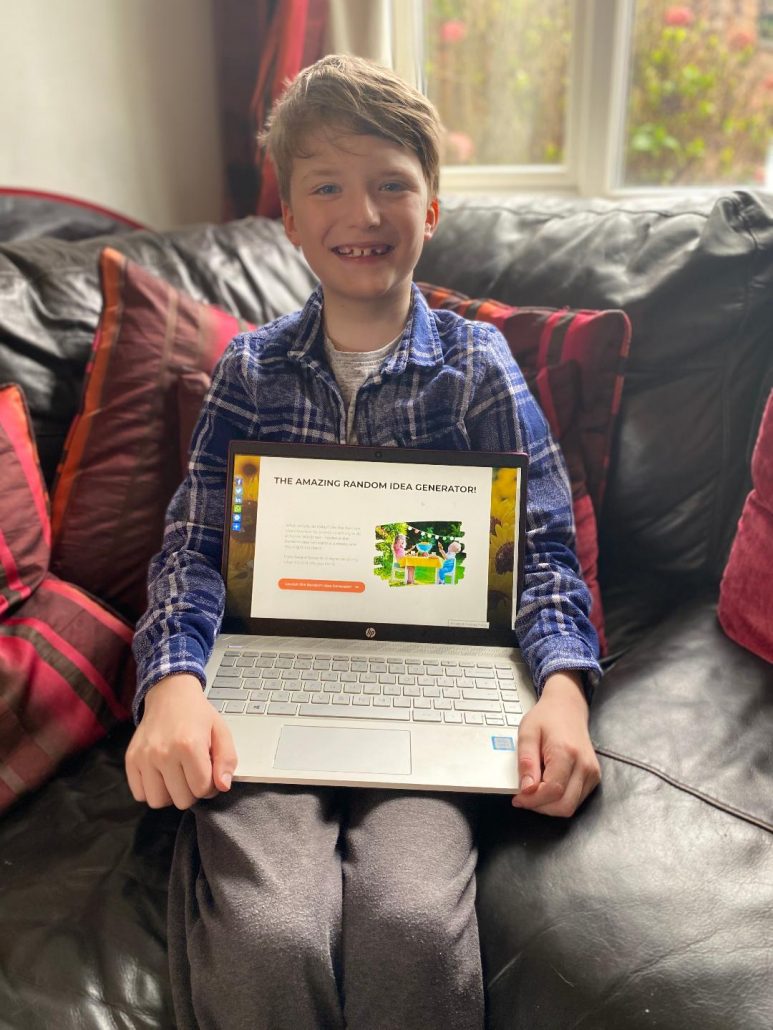 So Sam, tell us a little bit about yourself.

I’m Sam, I’m 11 years old. I like computers and electronics, trampolining, and reading.

Tell us about the Idea Generator and how it works?

I first came up with the idea ages and ages ago.  It started off as a cardboard box, that you picked ideas out of that were on pieces of paper.  The way it works is, you go onto the website and press the button, and it gives you a random idea out of over 200 that are programmed into it.  You can also send in your ideas and reviews and they will get published. There is the original Random Idea Generator, a randomiser for Things to Do at Home, one for Random Acts of Kindness, and other categories.  I am adding things to it all the time.

How did you think of the idea all them years ago?

It all really came down to the idea that it was the holidays, I was bored, I didn’t know what to do and it was impossible to choose, so I got an old cardboard box and wrote down all the ideas on bits of paper and picked one at random. I love making things out of cardboard, so I really wanted to make the idea generator! That was the best idea of all!

Can you give us some examples of ideas that you’ve inputted into your generator?

At first they were all my favourite things, but now other people’s ideas are in it too.  My ideas were things all the way from painting models, making play doh, baking cakes, making potions and mixtures, go to a trampoline park, swimming, junk modelling, going to the park, coding day, and there’s the one thing you don’t want to get – so bad luck to you if you do get it –  It’s Tidy Your Room!

How do you visualise your generator being used in years to come?

Thats hard to say! Just the general public, I would like lots of people to be using it!

Do you have any other skills or ideas you can think of to create something else as fun as your generator?

Yes! Its not online it’s a game that I am using electronics for. I like making electronic circuits and inventing things!

Lastly, please tell our readers where to go to use your fab creation

You can find it at www.whatshallwedo.co.uk

It was so lovely to chat with Sam about his amazing creation and we’d love some of our readers to add their own ideas to his generator.  Simply give us a follow on Ordinary Magic’s Facebook page and drop us a DM!